Welcome to the open marketplace for

Retail and Wholesale with No listing fees. 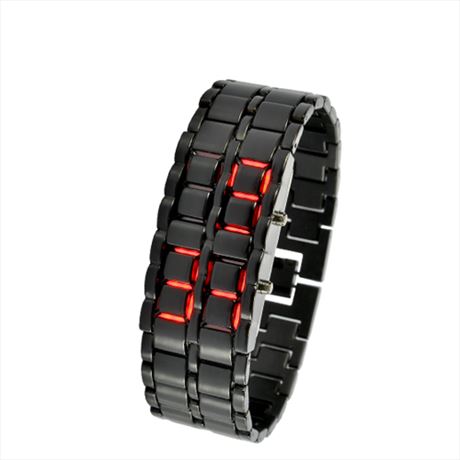 LED Men’s Watch with Metal Design and Red LED Time Display. This is your chance to wear a piece of long forgotten Japanese history.

The “Dark Samurai” LED Watch is a full metal watch which displays time and date using Red LED technology. Doubling as a stylish bracelet, the “Dark Samurai” only lights up when you press the button and reveals a deep red glow, unveiling the current time. Fitting perfectly around your arm, the shackles of the watch move separately providing unmatched user comfort. But the “Dark Samurai” is also more than a watch! A long forgotten story about its creation has recently been rediscovered and this is how it goes:

When the Europeans arrived in Japan in the early Sixteenth Century, the Japanese had the most ferocious fighting force ever. The famous Samurais fought relentlessly for honor and their nation. Their combat skills, their agility, their accuracy, their strength, their morale were trained and pushed to the limit. Unfortunately the introduction of firearms in 1543 brought doom to these noble warriors… and yet, one last Samurai survived.

In the fateful Battle of Nagashino in 1575, an army of simple peasants and farmers, organized as gunners, mowed down a charge of several thousands of Samurais by firing volleys of bullets, hidden behind wood palisades. This perfidious strategy brought the noble Samurai code to an end. The Dark Samurai reputed for his ability to fight in the darkness, seeking to preserve the Samurai’s honor from depravity of humankind, climbed Mount Fuji and prayed the ancestral Gods for days…

His call was finally heard and a pact was sealed. He accepted to offer his life and soul to the sacred mountain and, in exchange, the spirit of Samurai would remain forever wrought in the bowels of Mount Fuji. Centuries passed by and the heroic deed was forgotten. To avoid the complete disappearance of Samurai existence, the volcano released a precious object housing the Samurai soul: a beautiful Dark Watch with Lava Red LED Display.

Feel the rebirth of the Samurai spirit with the Dark LED Watch around your wrist. Help preserve the Samurai code by selling on your online store this symbol of the enduring Samurai Spirit - and make amazing profit at the same time. Discovered and brought to you by the leader in awesome gadgets and electronics, Chinavasion.